From Nazareth to Bethlehem

Most probably, the Holy Family traveled to Bethlehem along the pilgrim’s way.  It wasn’t the shortest, but it was the safest and most cost-effective for a poor and pious family.

Upon leaving Nazareth, Joseph and Mary went across Cana.  Before reaching the Lake of Tiberias, the road turned south. They followed along the edge of Mount Tabor to the East and before reaching the great city of Scythopolis, crossed the Jordan river at a roman bridge that still stands today; then they walked along the Peraea royal roadway.  This allowed them to always travel within Jewish territory.  Herod and his successor, Herod-Antipas, reigned over Galilee and Peraea, a narrow strip of land between the Jordan and the Transjordanian mountains.  Subsequently, Mary and Joseph, the same as many other Jewish pilgrims, crossed the city of Pella and again traversed the Jordan at Jericho, where they likely rested before beginning the long ascent to Jerusalem.  Along this arduous trek, pilgrims usually prayed the Songs of Ascents (Shir ha-Ma’alot) which are comprised of Psalms 120 to 134. 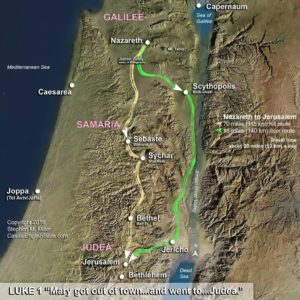 After traveling across the Holy City, we can imagine that Mary asked Joseph to make a short detour to visit Elizabeth and see baby John in Ein Karim.  They reached Bethlehem after a final twelve kilometer stretch through hills and valleys. 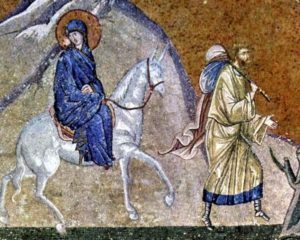