It’s Friday, 3.00 pm. The sun heats up the Old City of Jerusalem announcing that the end of spring is close. Under the blue masks your own breathing is like an oven for your face. No wonder why many people wear them under their chin if the place is not very crowded. The shade of the narrow streets provides a cooler air and a bit of a rest from the sun. A few months before, these streets were packed with tourists looking for souvenirs. Now, very few shops are open, mainly food stores, but you can also find some shops with exotic gifts and souvenirs. The owner timidly looks to the people that pass by, maybe thinking that not long ago he would be shouting and trying to speak a few words in other languages to convince tourists of the wonders they would find in his store for a cheap price. 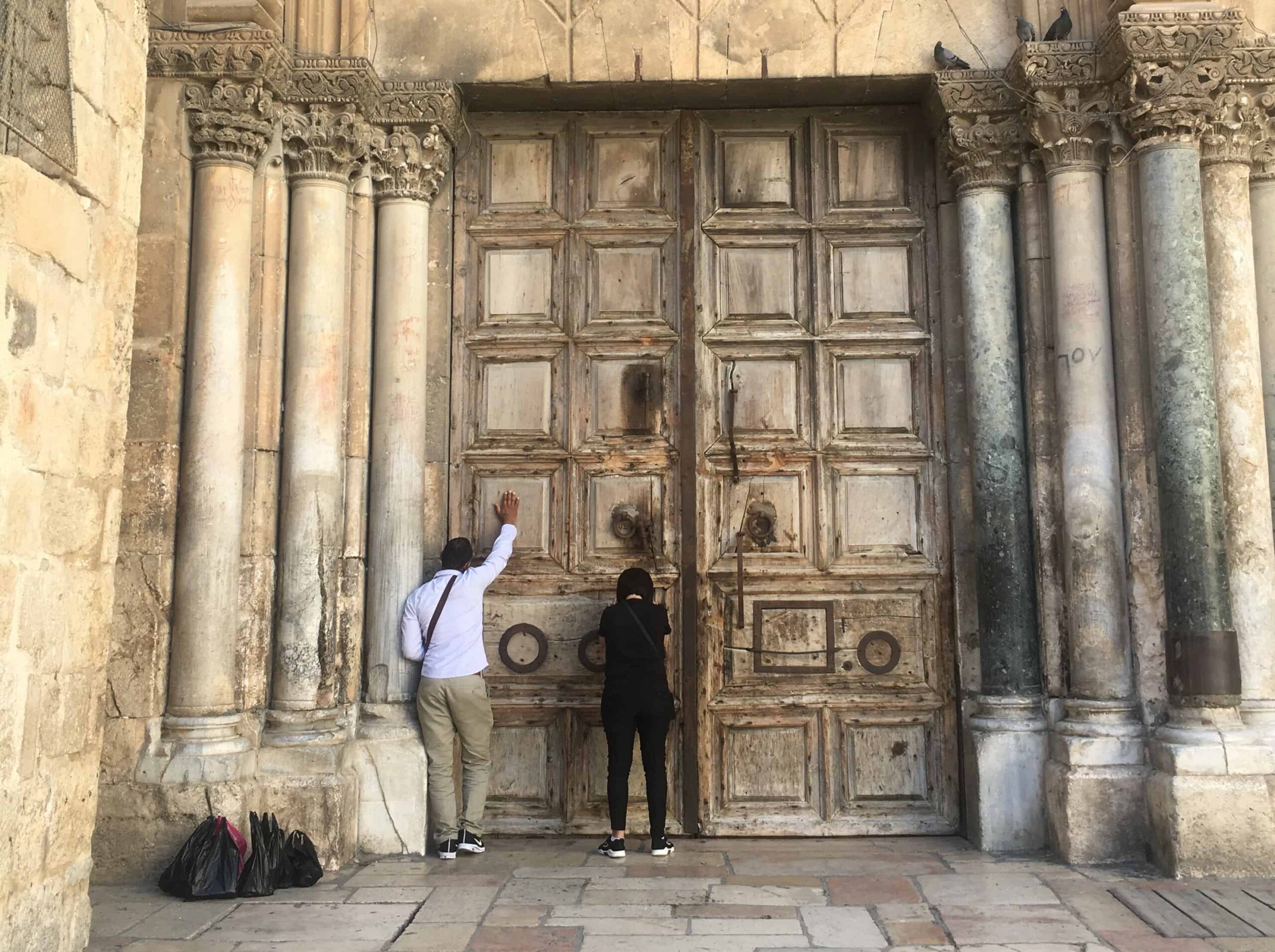 A street with all shops closed goes down and ends in the square of the church of the Holy Sepulchre. Who has already visited this place knows that it is not like European gothic cathedrals, with high ceilings, colorful stained glass, symmetric architecture and solemnity that makes people whisper without realising, as if they were fearing to awake someone. No, the Holy Sepulchre is an irregular church, with many turns, corners and little perspective of the complete space; stairs that go up, stairs that go down, hidden chapels, tons of ornaments hanging on the ceiling, paintings, mosaics, candles… There is not a logic speech that links one image with the next one. This harmonious disorder is the result of centuries of different Christian faiths sharing the same space.

The usual picture does not differ from the setting: the place is packed with groups of pilgrims, tourists and curious people that go up, go down, in and out, singing or talking. It feels like a market and the noise of voices makes it difficult to pray or meditate. The guides give their explanations, the guards shout to each other in Arabic and the communities of Armenians, Orthordox and Franciscans keep doing their prayers and singing at the scheduled time passing among the crowd in a procession from one place to another of the church in the middle of the fume of incense that adds that particular aroma to the set. 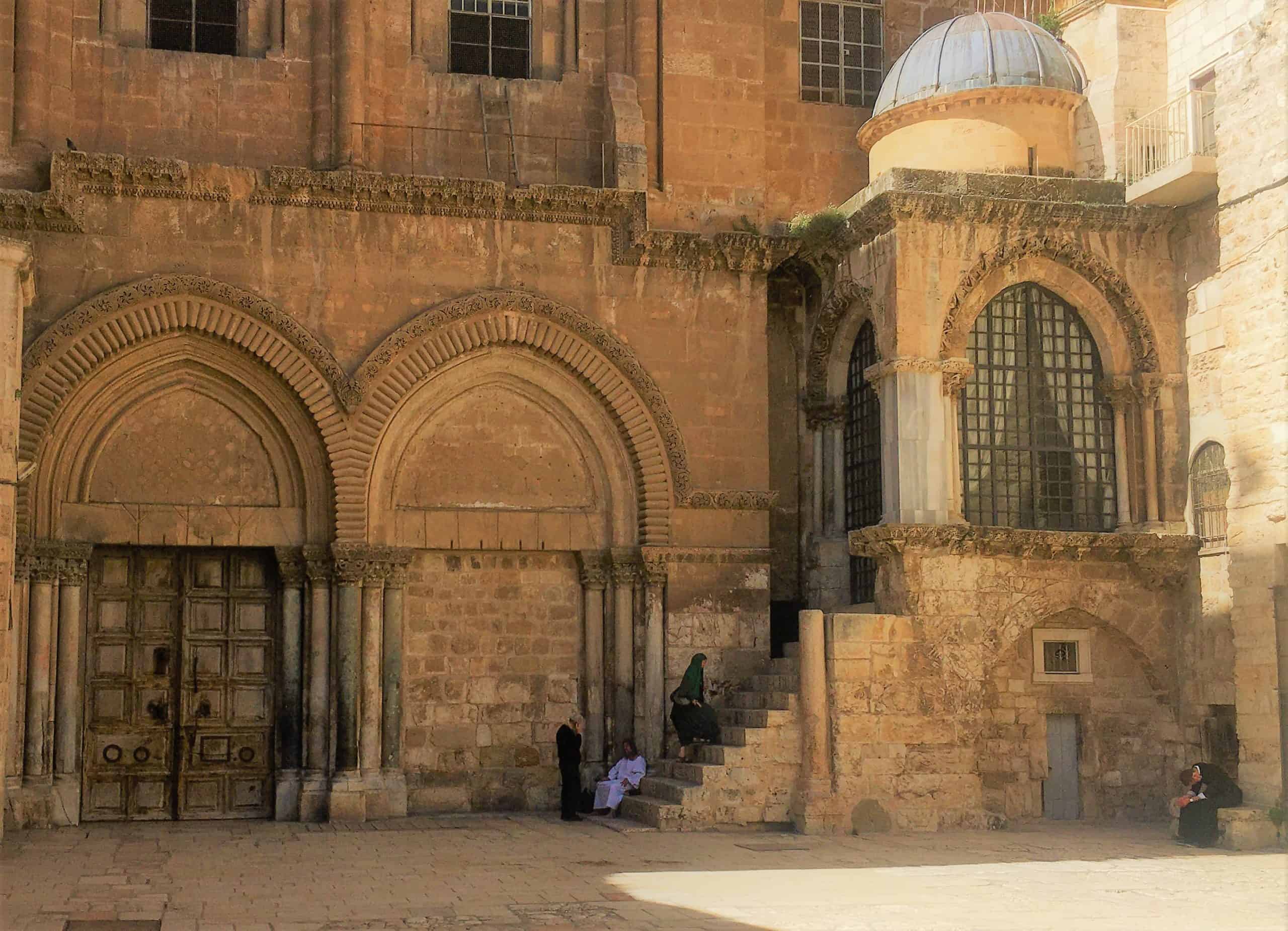 However, everything has changed since the tourists left and it was closed due to the coronavirus. The square is usually empty except for a few people praying before the doors or a neighbour passing by. The silence is somehow spiritual and invites people to stop and meditate despite the heat. Seated on the stone staircase near the door is a man known in the Old City as Jesus Man, a devout catholic that prays in the Holy Places dressed like in Jesus’ times, his hair and beard as you would imagine St. Peter’s. A Franciscan with his mask under the chin, prays seated on a big stone.

A man dressed all black, with long beard and white hair in a ponytail, stops to exchange a few words with Jesus Man while a religious woman with a green long dress and her hair covered goes up the staircase and starts kneels on the top to pray. The birds are singing, everything else remains in silence.