The Lands of the Bible

On the eastern shore of the Mediterranean there is a long strip of fertile land that, since the beginning of history, has been a natural thruway for caravans traversing extensive deserts to travel between Egypt and Mesopotamia.  God promised that land to Abraham: “All the land that you see I will give to you and your descendants forever” (Gn 13,15).  For the descendants of Abraham therefore, this is not just any country, it is a Holy Land.

In the northern zone is the region of Galilee.  Its hills are covered by vineyards and olive trees, and in some valleys, they grow wheat or barley.  Tare weeds sometimes sprout in the cereal fields. Among the main garden variety plants one can find lilies that splash the countryside in spring and adorn it with joy. 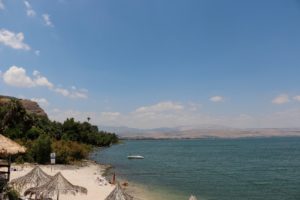 South of Galilee and separated by the Esdraelon Valley (also called Jezreel), there is a rocky extension of hills and small mountains which make up the region of Samaria; limited to the East by the Jordan River Valley and to the West by the Mediterranean Sea.

The southern part, Judea, is a mountainous, arid region. A large portion of it is comprised of the desert of Juda on its eastern flank, towards the Dead Sea.  It is an eroded territory of broken grounds, with steep hills penetrated by deep wadis or ravines derived from torrents.  In the areas closest to the Dead Sea, a steep depression of up to 400 meters below the Mediterranean Sea level, with arid floors that are covered in salt, displays some of the most desolate places worldwide.

Olives are grown in the mountains of Judea, while its hills and fields contain extensive vineyards. One can also find abundant fig trees and some similar, more robust, and larger trees, typical of the region, called Sycamores.  In the Jordan Valley and some proximate zones to the Dead Sea there is an abundance of date palm trees. 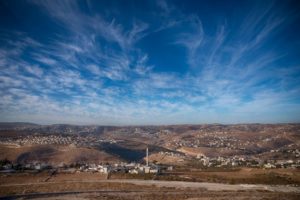 View from the Herodion, by Eyal Asaf

Two thousand years ago, the two most important cities in Judea were Jerusalem and Jericho.  They were connected by a roman via that steadily climbed to overcome an uneven terrain of over one thousand meters in height, stretching between the two in the desert of Judea.  When the traveler arrived at the thresholds of Jerusalem, in the village of Bethany, he or she could find the first few fountains and trees close to the city in which to enjoy a refreshing shade.

Bethany is separated from Jerusalem by the Mount of Olives.  Upon reaching its summit, you are dazzled by the beautiful panorama at your feet.  Below is the Kidron Valley and next to it the garden of Gethsemane, with its ancient olives and its oil mill.  On its opposite side, the Temple shined in all its glory, with its immense esplanade and grandiose construction.  In the nearby hillside the houses of the old Jerusalem offered, and offer even today, an endearing and unforgettable landscape.

During the empire of Augustus and Tiberius, a Jewish youth named Jesus was born and lived in the land of Israel and spent the majority of his life in Nazareth.  The Son of God become man, walked on the dust of its roadways, endured its unbearable summer sun, enjoyed the shade provided by its trees, tasted the sweetness of its figs and vines, and relished its fresh waters.