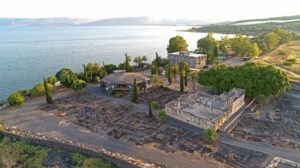 “As he was passing by the Sea of Galilee,” one day, Jesus “saw Simon and Andrew, Simon’s brother, casting their nets into the sea; they were fishermen” (Mk 1,16). Later, under very similar circumstances, Jesus called the sons of Zebedee. “And they left their father Zebedee in the boat with the laborers and followed him” (Mk 1:20).

Simon-Peter and his brother Andrew, John, and his brother James, were disciples of the Baptist, who invited them to follow Jesus. An initial meeting between Jesus and these first four disciples had already taken place on the banks of the Jordan (Jn 1:35-51). They asked him where he lived: “come and see”, Jesus answered them.

Later, they returned to Galilee while Jesus headed towards the desert, where he would be tempted for forty days (Mt 4,1-11). Returning to Galilee, Jesus spent a few days in Nazareth -perhaps to say goodbye to his Mother (Mt 4,12). Next, we read in the Gospel of Saint Matthew, Jesus “went to live in Capernaum, a maritime city, in the confines of Zebulon and Naphtali.” For what reason did Jesus choose to live in this small port, north of Lake Tiberias? Capernaum is located on the west bank of the Jordan River, which traverses lake wide. At the time of Jesus, the upper Jordan River served as a natural border between Galilee, under the power of Herod Antipas, populated by a Jewish majority, and the territories of Philip the Tetrarch, populated mostly by pagans. In addition, just above the town of Capernaum, was the Via Maris, the main connection between Cesárea Marítima on the coast and Damascus in the interior. We are not surprised, therefore, to meet Matthew, a tax collector, at this border post, Capernaum.

Also, the location of Capernaum, at a certain distance from the centers of political power of Herod Antipas (Tiberias and Sepphoris) allowed Jesus to move with some freedom in the surrounding Jewish towns: Corozain, Magdala, Bethsaida etc. 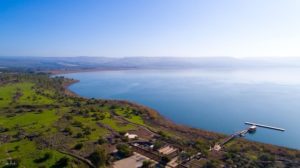 One day, while Jesus was in Capernaum, Jesus passed by Peter’s house, or rather his mother-in-law’s. She was in bed with a fever. Jesus, taking her by the hand, healed her. We can imagine that, grateful for her healing, she compelled Jesus to stay in her house. From then on, Peter’s house became the center of operations for Jesus and his disciples: “the whole city crowded at the door” (Mc 1,33) to listen to the Master and bring him the sick and possessed so that he might impose his hands on them. 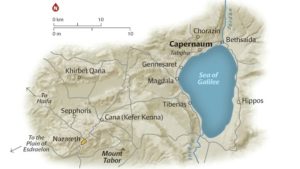 Built with volcanic stones, Peter’s house was indistinguishable from the other fishermen’s dwellings in Capernaum. Later, Simon Peter followed Jesus to Jerusalem. Except for a brief hiatus after the Lord’s resurrection (Jn 21),

Peter probably did not return to his family home. After Pentecost, the chief of the apostles presided over the expansion of the Church in Judea and Samaria before traveling to Rome where he died as a martyr. 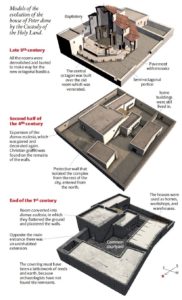 House of Peter, by the Custody of the Holy Land

The inhabitants of Capernaum then decided to highlight the importance of the “House of Peter”. The walls were covered with white lime, in which pilgrims who had traveled from far away, began to engrave graffiti, in various languages, to honor the memory of this great fisherman from Galilee, in whom Jesus relied as the foundation for his Holy Church.