In the Middle Ages, Catholic pilgrims would visit the main sites of Jerusalem, and then set out on a multi-day pilgrimage to Bethlehem and the mountains of Judah. They were accompanied by a guide and interpreter (the dragoman) and by some Franciscan friars. The diaries written by these pilgrims mention many holy places visited in the short distance between Jerusalem and Bethlehem: the stone on which the Virgin Mary sat down to rest before entering Bethlehem, the Well of the Magi where the star reappeared to them, and Rachel’s grave. In Bethlehem, inside the Basilica of the Nativity, in addition to the altar of the Nativity and the manger, they were shown the place where the Magi dressed and prepared before adoring the Child, the altar of circumcision, the well into which the star fell after having fulfilled its mission of guiding the Magi and many other places not included in the Gospel accounts but derived from popular piety. 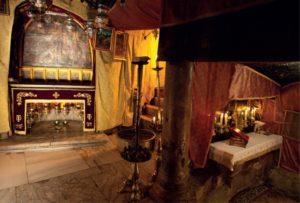 The Grotto of the Nativity, by Enrique Bermejo/ CTS

There is a striking contrast between this proliferation of holy places and the sober and concise account of the birth of the Son of God recorded in the Gospels. Saint Matthew is particularly scant when he writes, “After Jesus was born in Bethlehem of Judah in the time of King Herod…” (Mt 2,1), as if the birth of Jesus was simply an opportunity to narrate the arrival of some Magi from the Orient, guided by a star, to adore the King of the Jews. St. Luke gives us a little more context about the salvation event: “Now it happened that, while they were there, the time came for her to have her child, and she gave birth to a son, her first-born. She wrapped him in swaddling clothes and laid him in a manger because there was no room for them at the inn.”  (Lk 2, 6-7). Just as Mary wrapped her Son in swaddling clothes, Luke wraps the Redeemer’s birth in the intimacy of mystery, leaving the reader to savor the event. It is as if the two evangelists of the childhood of Jesus were in a hurry to tell other stories.

The Field of the Shepherds 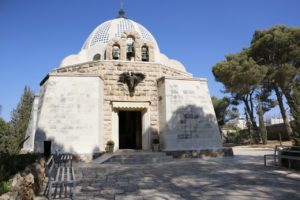 In his Gospel, Luke transfers the story of the Nativity to the outskirts of Bethlehem, to a place that tradition, following the prophet Micah (Mi 4,8), identified as the “Cattle Tower” (Migdal Ader). There, some angels appeared to a group of shepherds. These humble shepherds who kept watch while most inhabitants of Bethlehem slept comfortably in their homes, were given the privilege of being the first to know the good news of the Savior’s birth. The Arabic name for the current town –Beit Sahour– preserves the memory of the event, as it means “house of the night watchmen” 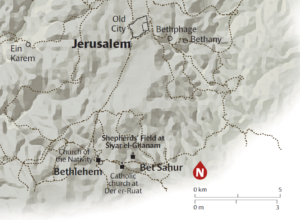 Map, from Footprints of our Faith

Two kilometers separate Beit Sahour from Bethlehem. Going up the steep slope, the shepherds, full of joy, “came in haste” (Lk 2,16) towards Bethlehem to adore the Child. They did not have to enter the city because Joseph, after struggling to find a decent place where his wife could give birth, had to resign himself to choosing an abandoned stable, carved into the rock on the outskirts of Bethlehem.

According to the third century works of Origenes -a hundred years before Constantine and Saint Helena erected the Basilica of the Nativity on that stable-, local guides would take visitors to the grotto where Christ was born and the manger where Mary placed Him, wrapped in swaddling clothes (Contra Celsum 1.51). Saint Jerome, at the end of the 4th century, laments that the original wooden nativity scene is no longer visible, because it is covered in silver (Homilia in Nativitate Domini CCL 78, 524). This original manger was later cut into pieces and distributed throughout Christendom. Due to unfortunate circumstances of history, Bethlehem lost her piece. To correct this, three years ago, Pope Francis gave the Holy Land a part of the relic that had been preserved in Rome, at the Basilica of Santa Maria Maggiore, since the seventh century. Today it resides in a side chapel at the Church of Saint Catherine, in Bethlehem.