“As he came near and saw the city, he wept over it, saying, “If you, even you, had only recognized on this day the things that make for peace! But now they are hidden from your eyes. Indeed, the days will come upon you, when your enemies will set up ramparts around you and surround you, and hem you in on every side. They will crush you to the ground, you and your children within you, and they will not leave within you one stone upon another; because you did not recognize the time of your visitation from God.” 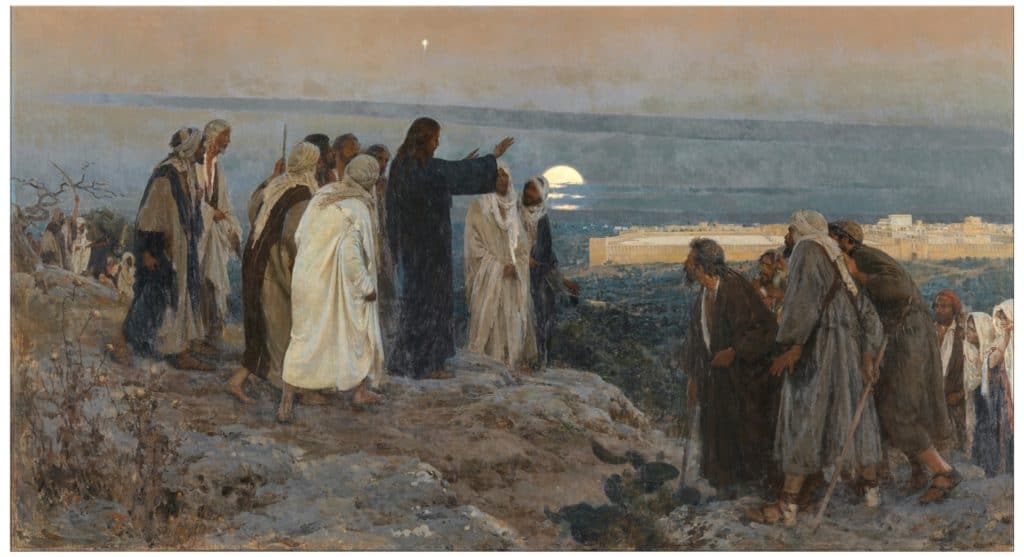 In this painting of imposing magnitude, the viewer enters the scene from behind the disciples and sees Jesus in profile. All gazes – of surprise and amazement – are directed towards him. It is dusk in Jerusalem and the first star has arisen. He weeps as he looks down on the city from atop Mount of Olives. It is a solemn and terrible moment in which he prophesies the destruction of the Holy City, which was fulfilled in the year 70 AD, when Titus and his Roman legions besieged and destroyed Jerusalem.

Unlike most artists who have painted religious scenes, Enrique Simonet Lombardo traveled to Palestine in the late 19th century to document the setting himself. The result is masterful, as it perfectly captures the height of the mountain, the type of vegetation, and the view of the Holy City. Not surprisingly, the place chosen by Simonet is today one of the most spectacular viewpoints in Jerusalem, from where there is a privileged view of the Esplanade of the Mosques, which the artist himself would have seen from there, as it has stood since 691 on the site where the Temple was in the time of Jesus.

Simonet takes us back in time through the realism of the characters, for whom he was inspired by the local people and scenery of the place. Several shrines stand there today, including Dominus Flevit (The Lord Wept), which recalls this same scene from the Gospel and has existed since the 14th century. The light of the evening sun, which illuminates the center of the painting, also seems to premonize the setting of Jerusalem that encloses Jesus’ prophecy.