In the era of massive tourism, we are used to pilgrimages in which we reach the Holy Land by plane, travel around it inside an air-conditioned bus, stay in friendly hotels and eat in restaurants. But have you ever wondered how pilgrimages were back in time? In those times, pilgrims embarked on a journey unsure of how long it would be and whether they would ever return.

It was, literally, the trip of a lifetime, as anything from a shipwreck to a fatal disease could await before or after reaching the Holy Land. Not to mention all the dangers they faced on the roads or the extortion they could suffer from the local population.

From the 12th century, most pilgrims would embark on Venice to reach the Holy Land in the late medieval period. Before that, many passed through Rome and visited the significant basilicas there. The trip by ship was very uncomfortable and could last from four to six weeks sailing the Adriatic coast, the Peloponnese coast, Crete, Rhodes, Cyprus…

Finally, they would see Jaffa port, but before disembarking, they would have to wait at least one more week until they were granted a permit from the local authorities to land. From Jaffa, they would need to reach by donkey the neighboring city of Ramleh, where the Franciscans had accommodation for them. 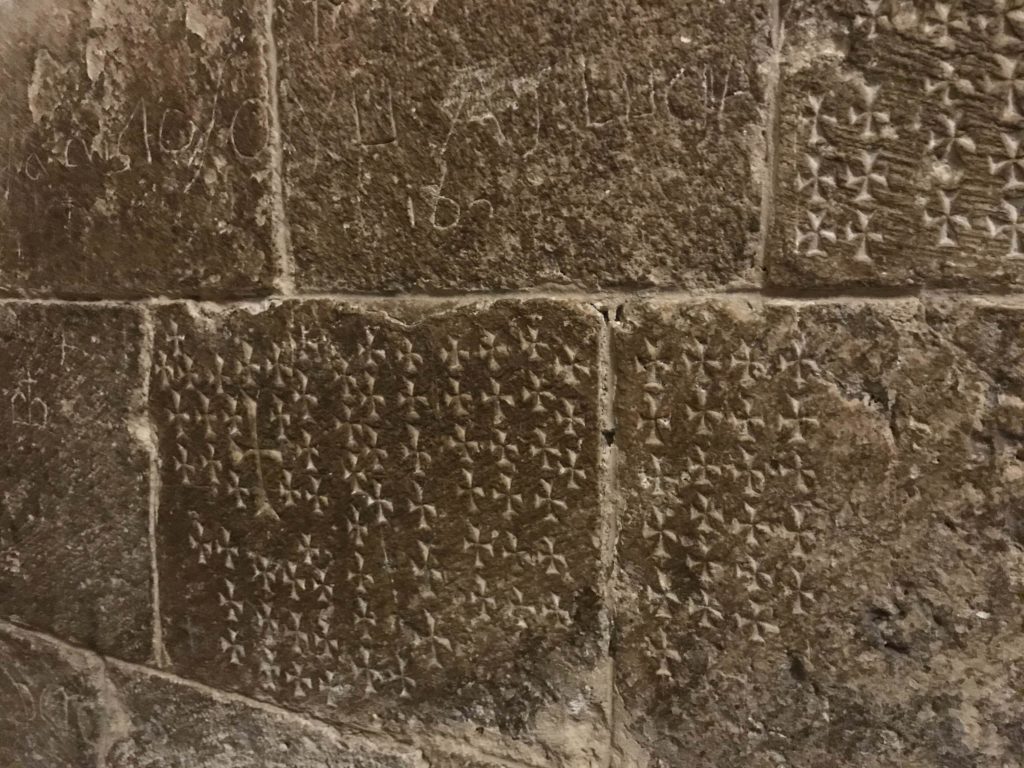 Crosses carved on the walls of the Holy Sepulchre that date back to the 12th century | I. Rodríguez

The journey continued in a caravan to reach Jerusalem through the hills of Judea. Due to the lack of safety, most pilgrims could not visit Nazareth or the area of Galilee. In Jerusalem, the Franciscans had a base camp on Mount Zion and organized their route through the different holy places.

The peak moment would be visiting the Basilica of the Holy Sepulchre, where they stayed all night locked inside, visiting the different chapels. Some would carve off a piece of those ‘holy stones’ to take it back with them. To channel this fervor and avoid destroying the sites, artisans would carve small crosses for each pilgrim on the walls that led to St. Helena’s chapel.

These small crosses are still there as a memory of those brave men and women who risked everything to make their lifetime trip: reach the Holy Land.

Reference: Pilgrimage to the Holy Sepulchre at the Dawn of the Renaissance, by Henri Gourinard.