Until the thirteenth century, many theologians thought that Mary was conceived with the stain of original sin and subsequently, the same as John the Baptist and others, was cured of it in the maternal womb.  Even Thomas Aquinas describes it that way, saying that “if the soul of the Virgin Mary had never been stained by original sin, it would be detrimental of the dignity of Christ, universal savior of all.” (STh iii, 27, 1 ad 2).

It was a Franciscan, John Duns Scotus, who laid the foundations for this new interpretation – “God could create the Virgin in the state of original purity; it was convenient for her to be so; therefore, he did it.”

The Immaculate Conception of Mary is the beginning of the New Testament. The time of the promise of redemption for all humanity, the fulfillment of the protoevangelium in which the Woman will crush the head of the serpent, united to the redemption of humanity. 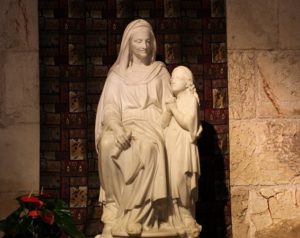 Mary, the Woman, was never under the dominion of sin. Eve and her descendants were.

The man was initially created without sin, so that he would not die, but would live happily in Eden. But he chose not to. However, Mary is the only human creature who, having no original sin, assumes the fullness of humans. She is radically Woman, with the maximum freedom and personal fullness created.

Therefore, Mary was the first and only human creature who lived her entire life according to the original model of God the Father.  This is why we know that her nature was infused with the preternatural gifts such as Wisdom, Integrity, Immortality, Impassibility, and perfect dominion over the animals, during her whole life on earth.

Everything was only possible by anticipating in time of the merits of her Son: The only Savior. Therefore, all these links, from the Immaculate Conception of Mary to the death and resurrection of Jesus Christ, form a single chain.

In 1845 this truth of the Immaculate Conception was proclaimed as a dogma of faith. It was on December 8th, when Pius IX, via the Constitution Ineffabilis Deus, solemnly proclaimed that: “The Most Holy Virgin Mary, from the first moment of her conception, by a special grace and privilege of God Almighty, and in view of the merits of Jesus Christ, savior of the human race, has been preserved immune from all stain of original sin.”

Thirteen years later, in a small cave in the French Pyrenees, the Virgin appears to a fourteen-year-old shepherdess and tells her “I am the Immaculate Conception.” Bernadette Soubirous, the seer, does not understand these words, she had never heard them, nor did she know anything about what had happened in Rome. 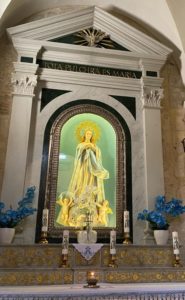 It is in that sublime moment of her Immaculate Conception, when a direct relationship between the Woman and the Holy Spirit is established. Mary wanted to engrave this great news in our hearts through the heart of an uneducated young woman, she engraved it with fire in Saint Bernadette.