Saint Francis and the Sultan: The Origins of Franciscan presence in the Holy Land.

“The sultan’s tent: where is it, please?” a man dressed in rags asks politely but firmly. The Muslim guards, overwhelmed by so much candor and daring, escort the poor man to the presence of Al-Kamil, nephew of Saladin the sultan of Egypt.

The scene took place in 1219 in Damietta, on the banks of the Nile. While tens of thousands of Christians and Muslims fought to decide their respective fates on the battlefield, Fray Francisco, an Italian from Assisi, appeared before the most powerful leader in the Muslim world to talk about religion and – God willing – convince him to receive baptism. Not much is known about the content of the interview from direct sources, but it is said that Francisco’s offer was politely rejected. Later on Francis traveled to Palestine to visit the Holy Places and establish there the first convents of the Order of Friars Minor in the Holy Land. 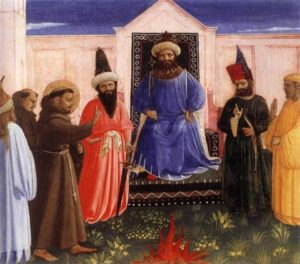 The Trial by Fire of St. Francis before the Sultan (Fra Angelico, c. 1429. Lindenau, Altenburg, Germany)

From the viewpoint of apologetics, Francis’ interview with the sultan was not a great success: Al-Kamil did not convert. From a geopolitical angle, there was no success either: the Crusaders failed miserably in their attempt to conquer Egypt. This defeat fueled a current against the crusades in a Europe which was tired of a costly undertaking that frequently diverted from its ultimate goal: liberating the Holy Sepulcher.

But this crisis of confidence towards the idea of the crusade forced Christianity to rethink its position towards Islam: military reconquest gave way to mission. Instead of subduing the Saracens militarily, why not give them sufficient reason to embrace the Christian faith?

Encouraged by the pope, Franciscans and Dominicans launched themselves during this thirteenth century on a missionary adventure that led them through the Mongol empire to the gates of China. Palestine served as their logistical hub. In the city of Acre, capital of the Crusader kingdom, these missionaries set up schools where they taught Arabic, but also Turkish and Persian. Their apostolic horizons did not stop at the borders of Islam but encompassed the wide steppes of central Asia dominated by the Turks and the Mongols.

Having been expelled from Acre by the Mamluks in 1291, the Franciscans gradually returned to the Holy Land a few decades later, this time with a different mission: the custody of the Holy Places.

As early as the 1320s, the King of Aragon, Jaime II, the papacy, and the Republic of Venice resumed contact with the Sultan of Cairo. Although one cannot speak of diplomatic normalization between Christianity and the Mamluk empire, conditions for a return of Catholic pilgrims to the Holy Land were established at that time. The Franciscans again took the road to the Holy Land. Sometimes they also stopped in Egypt where they ministered to the spiritual needs of the Christians in the sultan’s prisons. In the 1330s, the Franciscans rebuilt the Cenacle of Mount Zion which laid in ruins. In 1342, Pope Clement VI, with the bull Gratias agimus, solemnly confirmed the Franciscan presence in Jerusalem. It marked the birth of the Franciscan Custody of the Holy Land. 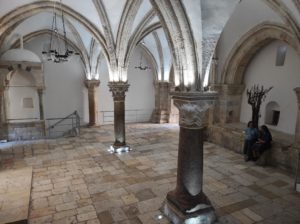 The Franciscans of the Custody then took up the coat of arms of the Crusader kingdom of Jerusalem: a red cross surrounded by four small crosses, also red, symbol of the five wounds of Jesus on the Cross. For centuries the friars of Mount Sion have cared for, guided and housed thousands of Catholic pilgrims in the Holy Land. Over time, their mission has been enriched by the pastoral care of Christians in the Holy Land: it is no longer so much about guarding the stones of the sanctuaries, but about serving the local Christian communities: parishes, schools, social centers, etc., which constitute the “living stones” of the Church in the Holy Land. 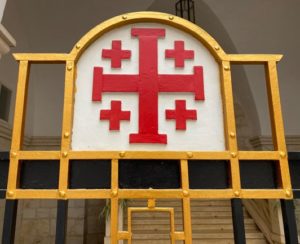 Symbol of the Custody of the Holy Land