The Conversion of Saint Paul

Saul marches towards Damascus to round up as prisoners the Christians that had fled the persecution in Jerusalem, when suddenly a light appears, he falls to the ground and hears a voice from heaven that says to him “Saul, Saul, why are you persecuting me?” At that moment, his conversion begins. What is Conversion?

Conversion is to personally find oneself with God. What does personally mean? We must study that in greater detail. Personal knowledge is different from intellectual knowledge. The latter knows without getting involved, it understands externally, objectively. But the person who has a subjective intimacy is a being that needs to be in another, acts in Freedom, knows with the habit of Wisdom, and loves from the deepest recesses of the heart, with a love that is a full gift of self.

We are able to know things, and others, and God, based on our own intelligence, and so we will appear before others based on what we have: titles, possessions, academic records, money, social status, etc., or, on the contrary, we can know from the viewpoint of the person, like the saints, who show what they are: sons of God. Establishing a personal relationship with our Creator is the end for which we have been created, that is to be with Him in happiness. It is in personal intimacy where we can grow or diminish as a person. No one knows our intimacy, except God, and no one can know it if we do not reveal it.

Let us see who Saul is: he is a Jew who has roman citizenship by birth and who knows and exercises his rights as such. He is a pharisee, son of pharisees, who studied at the school of Gamaliel. He speaks Greek fluently. He manufactures tents and perhaps even owns a small tent business (tents were used by all Jews during the Sukkot or feast of the booths). He is known to the Chief Priests and has direct access to them. He is a good speaker and a man of great intelligence paired with enormous culture. In addition, he is a man of magnanimous character, fearing neither life nor death, which allows him pursue great undertakings, and he has great zeal for the Law. All in all, he is a man of many gifts and virtues.

At first glance we see that his profile is very different from the twelve and also that God has called him to a special mission: preaching the Good News to the Gentiles. When the Lord says to him “Saul, why are you persecuting me?” he rebukes him personally, intimately. First because he calls him by name, he knows who he is; and second because he asks him a question which makes no rational sense. That “why?” can only be answered from the bottom of the heart, not with the intellect or the will. 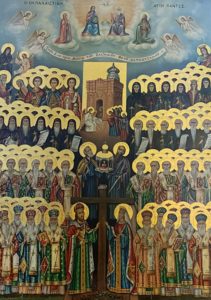 Church of the Holy Sepulchre

Saul responds with another question: “Who are you, Lord?” How do you know those things about me? It reminds us of the Samaritan woman. At that moment, the answer he receives erases all doubt: “I am Jesus, whom you are persecuting.” It is as if he says to him: I am the one that you are looking for outside yourself, similar to the way he addressed Agustin of Hippo. God then asks him to humiliate his “I” and establish a profound personal relationship with Him. “Give me your heart my son” (Prov. 23, 26), words he also conveyed to John Henry Newman. Saul, obliges.

He will be blind for three days, during which he will not eat nor drink. He will not use his bodily senses, remaining in an intimate dialogue with Him and purifying his being. This purification will go through the humiliation of the “I”, what he has, so that he can receive a superior gift, a filial relationship with his Father God and the full comprehension of His message. In this way, Saul receives him as son, and thus can redirect all of his efforts towards the mission that his Father God is asking of him. All conversions require abandoning a situation, something comfortable one possesses, in order to become a deeper, personal being. And that always tears away and requires an intimate scope, which is where our prayer should take place.

The transition from Saul of Tarsus to Paul was a very deep and intense conversion due to the very special mission received. The Apostles took years to convert, Saul only three days. Apostle of the peoples