The Golden Gate and the Exaltation of the Holy Cross

The Golden Gate and the Exaltation of the Holy Cross

From the front of the Church of “Dominus Flevit” in Jerusalem, a tour guide calls his pilgrims attention to the eastern wall of the Esplanade of Mosques. Just below the Dome of the Rock, the double arch of an ancient door stands out: the “Gate of Mercy” in Jewish and Muslim traditions. For Christians it is the “Golden Gate” or “Beautiful Gate”. 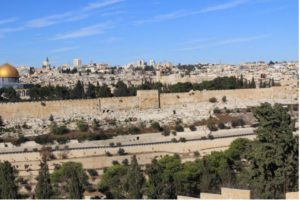 View of the eastern wall from Dominus Flevit

Why so many names for one door? As is often the case with the Holy Places, each name corresponds to one or more traditions.

According to a Jewish tradition, the Messiah, coming from the Mount of Olives, will enter through the Door of Mercy. Could it be the gate through which Jesus, mounted on a donkey, triumphantly entered Jerusalem? 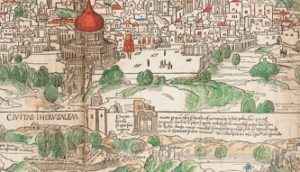 Finally, we read in the book of the Acts of the Apostles how a paralyzed man, seeing Peter and John going up to the Temple, asked them for alms. Instead of giving him money, Peter told him: “In the name of Jesus Christ of Nazareth, walk!” And he was cured of his ailment. This paralytic lay at the “gate called Beautiful” – uraia in Greek. Since this word sounds like aurea (golden) in Latin, the Latin pilgrims called it “Golden Gate”.

Others say that the door was closed by Suleiman the Magnificent or perhaps it was Saladin who rebuilt the walls of the Holy City, to make the Jews understand that they no longer had to wait for the Messiah. A Muslim cemetery was established next to it, so that the Messiah could not enter the temple without being impure by coming into contact with the dead. Before this, in the 12th century during the Latin or Crusades Kingdom of Jerusalem, the gate was opened once a year, to let the Palm Sunday procession through. 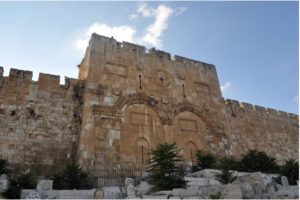 View of the Golden Gate and the Cemetery I H. Gourinard

Perhaps for this reason there is no lack of theories about who built the Golden Gate. One of them, supported by a medieval tradition, points to the Byzantine Emperor Heraclius who, on September 14th, 629, triumphantly entered Jerusalem carrying the Holy Cross which the Persians had stolen. An author from the 9th century, Rabano Mauro, tells us that “when coming down from the Mount of Olives, the emperor wanted to enter through the same door through which the Lord came to suffer” but, as he was dressed in all his imperial majesty and in his war chariot, the stones from the gate began to fall, blocking the entrance. Looking heavenward, the retinue saw a resplendent cross and an angel above the door. Heraclius understood that – following the example of the Lord of Heaven – he had to divest himself of his royalties if he wanted to enter the Holy City with the Cross on his back. 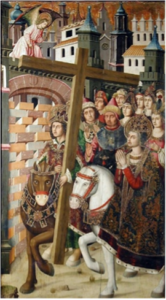