The privilege of living in the hometown of the Holy Family 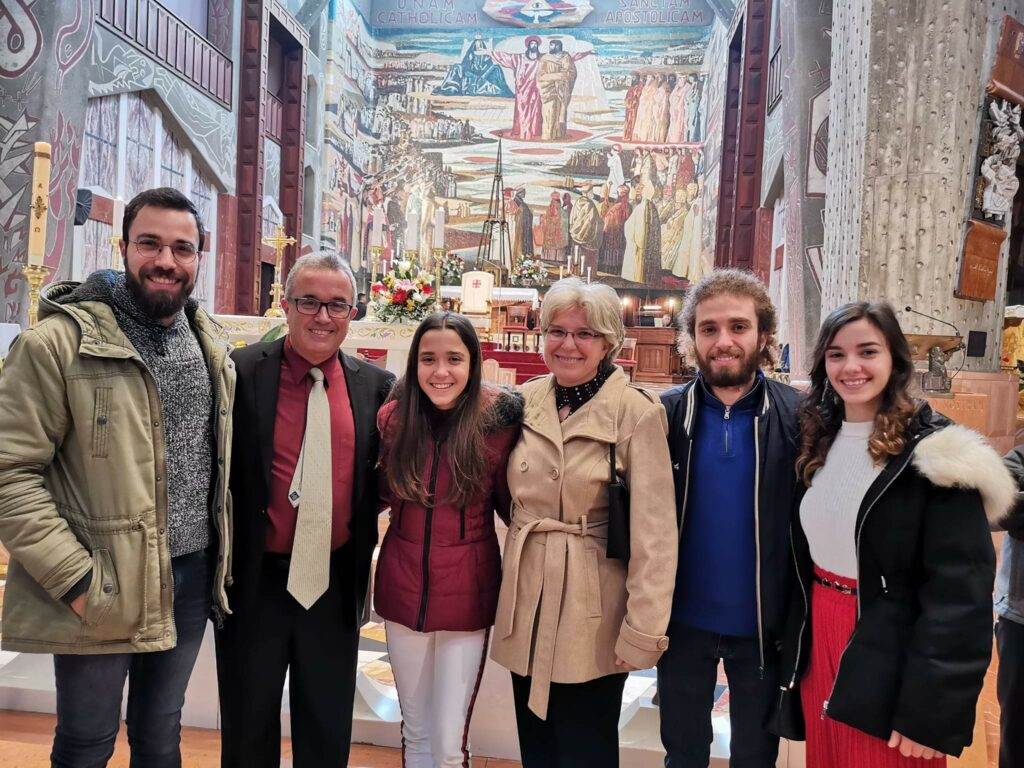 The Karam family in the Basilica of the Annunciation, Nazareth | Photo: courtesy of Gosayna

Nazareth. A young man meets a young woman. After seeing each other only two more times, he proposes, feeling strongly that it is the will of God. They get married two years later and they go to live in another country. They start raising their family there. However, after some years living abroad, he feels a strong calling to “Go home”. So, leaving everything, he took his family, and went back to Nazareth.

Does this story sound familiar to you?

“I see a lot of resemblance between Habib and Saint Joseph,” says Gosayna. She and Habib met for the first time in the Grotto of the Annunciation. Although both of them are from Nazareth, he was living in the United States and had come home for his sister’s wedding. Gosayna was living in Australia at the time, and was in Nazareth, her hometown, to visit her family. After meeting a couple of times more, once by the Sea of Galilee, they both saw God’s will in their budding love. Habib and Gosayna, both returned to the countries they were living in, but each had a clear understanding that distance would not undermine their decision to get married and be together.

They were married two years later in the very first place they met, the Basilica of the Annunciation. Afterward, they went to the United States to start their new life together. With the birth of their first son, “life was full of joy and love,” Habib says, but one morning, “we woke up to find that Akram had left us to be united with His heavenly Father.” Sudden Infant Death Syndrome (SIDS) had claimed the life of their five-month old son. Though devastated, they embraced that cross, trusting in God’s plans.

Time went by and they had two more sons and a daughter. But Habib and Gosayna’s life was to change radically once more. “Go home”. This was the calling Habib felt deep inside that God was asking of them. Without answers to all their questions, they sold everything and returned to their hometown, Nazareth. A few years later, they had another daughter. As Gosayna likes to describe herself, she is “a proud mum of five: Akram flying in heaven, Christopher with a great heart, Matthew with a brilliant mind, Serene with a lively soul and Katrina with an independent spirit!”

Life in the Holy Land is not easy for Christians, as they are a minority and face many challenges. However, as Gosayna says, “there is something unique, spiritual, special, and honoring to have the privilege to live in the same land the Holy Family walked, the same hometown as the Holy Family. As the years pass by, the details and fruits of why God willed for us to return to live in Nazareth is revealed,” says Gosayna. “To grow deeper in faith and spirituality; for our children to grow surrounded by the love of grandparents, aunts, uncles, cousins, and friends; as a couple, to be instruments of God in our parish and community, serving when, where, and whom He wills.”

In the year of St. Joseph, living very close to where he lived more than twenty centuries ago, Habib and Gosayna look at his example as “a spouse, a father, a brother, a teacher, a worker, a neighbor and more; in all roles he was a faithful son of God.” It is really a saint with which any Christian can identify.