The word “HERE” has never held so much force: Easter in Jerusalem

It’s Holy Week again. We’ve known the story and our church’s traditions for a long time – but what happens when we’re not only commemorating the events, but actually doing so in the very place where it happened more than two thousand years ago? Holy Week and Easter are lived intensely in Jerusalem and “to follow the steps of Christ” has never felt so real. Each year, the Franciscans of the Custody of the Holy Land are responsible for making pilgrims and locals experience this time as in no other place in the world.

On the eve of Palm Sunday, the thrill of the upcoming week can already be felt in the streets of the Christian Quarter of the Old City of Jerusalem. Palms are seen on the corners, the altars in churches have more flowers than usual, and the drums and bagpipes of the Catholic scout groups who will be marching the following day pour through the windows. 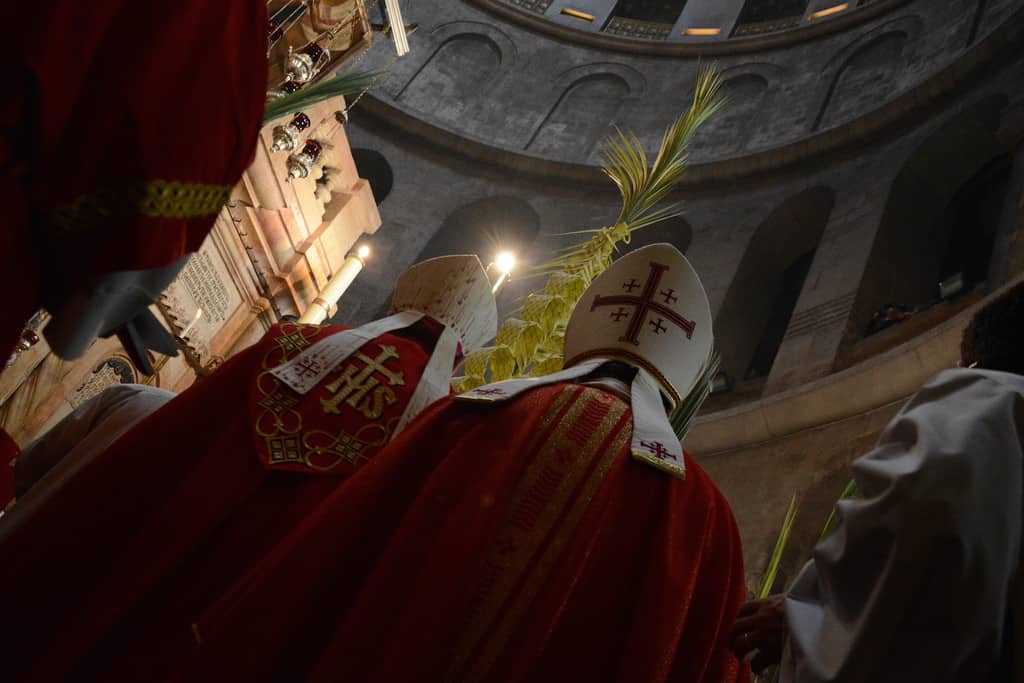 Palm Sunday arrives, and the celebration begins in the Holy Sepulcher. This year, the palms were blessed by Mons. Pierbattista Pizzaballa, the Apostolic Administrator of the Latin Patriarch of Jerusalem, and are handed out to the assembly and the concelebrants of several religious communities of the Holy Land. After the Mass, everyone processes around the Aedicule of the Holy Sepulchre three times, holding their palms up while the organ plays loudly.

That afternoon, more than a thousand people follow the same path that the Lord took when he entered Jerusalem. In a procession that begins in the Church of Bethphage, pilgrims walk down the Mount of Olives while waving flags, praying the rosary, and playing guitars. They pass Gethsemane and reach the Church of Saint Anne, where the Apostolic Administrator gives a solemn blessing with a relic of the true Cross.

At night, the streets of Jerusalem vibrate with the roar of the scouts’ drums and bagpipes who come from across the country to march not just during Holy Week, but also for other Christian holidays.

The next big day is Holy Thursday, the start of the Easter Triduum. Pizzaballa celebrated the Cena Domini Mass in the Holy Sepulcher. Next to the 250 concelebrants who renewed their priestly vows with him, he blessed the holy chrism, and then washed the feet of six priests and six friars.

In the afternoon, the Franciscans do another washing of the feet in the actual Cenacle and then lead a procession around the Old City, visiting some Armenian and Syrian churches along the way. As soon as night falls , thousands of people keep Christ company during his agony in the Garden of Olives. The silence in the Church of the Agony, the result of profound prayer, invites everyone to reflect during that Holy Hour, where the Gospel passage of the arrest of Jesus is read in different languages.

After the Holy Hour, pilgrims and locals retrace the path Jesus was led after his arrest to the house of the high priest. Crossing Kidron Valley, everyone makes their way to Saint Peter in Gallicantu, where traditions says that the Lord was imprisoned before being condemned to death. This year, heavy showers of rain took everyone by surprise, but didn’t stop anyody from completing the procession amidst songs and prayer.

Good Friday follows, and the gloomy weather since sunrise sets the mood for the day. Pilgrims fill the courtyard outside Holy Sepulcher from early hours, hoping to be able to go up to Calvary for the liturgy of the Passion.

There, in the vaulted chamber of Calvary where only a fortunate few fit, priests and the choir of the Magnificat sing the Passion and adore the Lignum Crucis (Wood of the Cross). After the celebration, the Franciscans lead the Way of the Cross through the Via Dolorosa.

At night, hundreds reunite in the Holy Sepulcher to attend the Funeral Procession. There, a lifesize crucifix with a figure of Christ is taken up to Calvary and, on the altar in front of the place of the Crucifixion, the Franciscans take down the body of the Lord and, in a shroud, take it to the stone of ointment, where they anoint the figure with oils and, covering it, place it inside the Sepulchre, just as Joseph of Arimathea and the holy women did on the night of Christ’s death.

Saturday comes and, in the Basilica of the Holy Sepulchre, the Easter Vigil is celebrated on Saturday, early morning. This is because of the Status Quo of the basilica, which has fixed the times at which each of the churches responsible for the Holy Sepulchre can celebrate liturgies. Since Roman (Latin) Catholics may only celebrate in the morning, the Easter Vigil is moved forward to 8am.

The bells start of the Basilica start chiming as the Hallelujah begins to echo through the church walls; those present in the holiest place on Earth share the joy with the rest of the world: He is risen!