God’s call to Abram, in the eighteenth century before Christ, is God’s entry into human history. God makes himself known to Abram as the only true God and asks him to leave his land and set out for a country to which He will guide him. To encourage him to obey, God promises Abram that he will be the father of a nation. Abram believes God and sets off from Haran, in Mesopotamia, to the land of Canaan, to the south, the land now occupied by Israel, Jordan, Lebanon, and Syria. Once in Canaan, God will strengthen Abram’s faith by putting it to the test several times. He first confirms with solemn words the promise he had made to him before leaving his Father’s house: All the land that you see I will give to you and your descendants forever (Gen 13, 15). 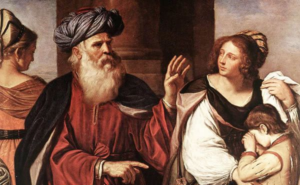 In his relationship with Abram, God adapts to the uses and customs of the time. In that era, when two kings wanted to sign a pact or agreement to enter an alliance between them, they sacrificed some animals to God –calves, lambs, etc.–, they would kill them, cut them in half and put one part in front of the other.  Afterwards, they would walk down the middle to express in a symbolic way that, if they did not fulfill their pact, they should also be cut in half with the same as those animals offered to God. And God, to seal his covenant with Abram, commanded him to offer the sacrifice of a calf, a goat, a lamb, a turtle dove, and a pigeon, and to cut them in half. At nightfall, a burning torch passed between those animals and God promised Abram: I will give this land to your descendants (Gn 15, 18). And shortly thereafter, God confirmed that covenant with Abram in the following terms: For my part, this is my covenant with you: you will be the father of a multitude of peoples. You will no longer be called Abram, but Abraham (father of multitudes), because I make you father of multitudes of peoples. For your part, (…) this is the covenant that you must keep: let every male among you be circumcised (Gen 17, 4-13). 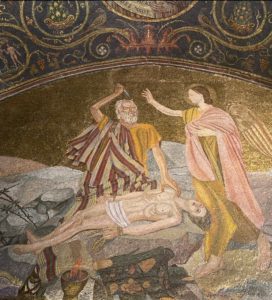 But Abraham was suffering an affliction: Sarah, his wife, had not given him children and now they were both in their old age. How was God going to make him the father of such a numerous people, if he did not have a son? In spite of everything, Abraham trusts in God and believes Him when, after some time, he appears to him in the form of three travelers next to the oak of Mamre and tells him: when I see you again, within the usual time, Sara will be pregnant and will have a son (Gn 18, 10). And indeed, Sarah conceived and gave Abraham a son in her old age, in the period that God had announced to her. Abraham named the son who had been born to him, Isaac, the one that Sarah had given him (Gn 21, 2-4).

When Isaac grew up and became a boy, God tested Abraham (…) God said: “Take your only son, the one you love, Isaac, and go to the land of Moriah and offer him to me there as a burnt offering on one of the mountains that I will show you” (Gen 22, 1-3). Abraham did what the Lord commanded him, but when he was going to kill his son, he heard the voice of an angel: do not stretch out your hand against the boy or do anything to him. Now I have seen that you fear God, because you have not reserved your son, your only son (Gn 22, 12). And the Lord confirmed his promises to Abraham: because you did not reserve your son, your only son, I will shower you with blessings and multiply your descendants like the stars in the sky and like the sands on the beach. (…) All the nations of the earth will be blessed with your descendants because you have listened to my voice (Gen 22, 16-18).

That was Abraham the patriarch, whom we remember even today.