“Without Jerusalem, our faith would be only a story”

ROME, Italy — On the afternoon of Saturday, June 9, the auditorium of the Pontifical University of the Holy Cross filled with Amici di Saxum (Friends of Saxum in Italy), who had come for their association’s yearly meeting. This year, the guest of honor was Archbishop Pierbattista Pizzaballa, the Apostolic Administrator of the Latin Patriarchate of Jerusalem, accompanied by Msgr. Fernando Ocariz, the prelate of Opus Dei. 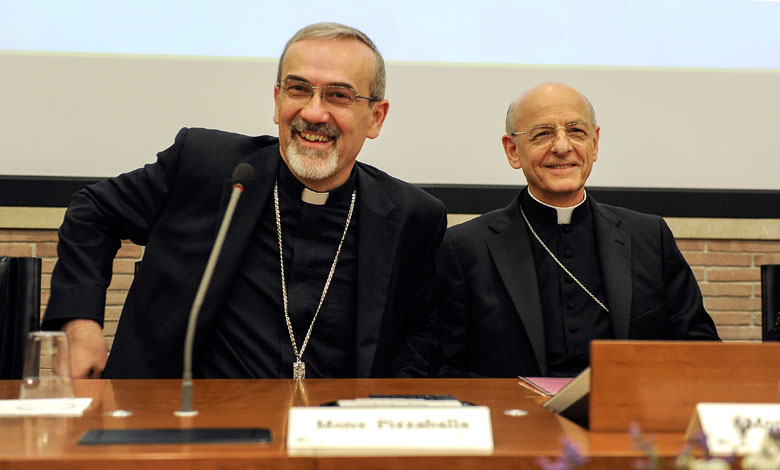 The center of the event was a lively exchange between the journalist Alberto Michelini and the archbishop. In a relaxed but deeply reflective atmosphere, they drew laughter from the crowd with humorous comments while touching on deep and complex themes: possibility of peace in the Middle East, the low numbers of Christians in these countries, and the droves of pilgrims who continue to come.

Msgr. Ocariz, in his welcoming remarks, thanked Pizzaballa especially for agreeing to come to Rome for practically 24 hours just to be present at this event. He reminded those present of the story behind the name Saxum: meaning “rock” in Latin, it was the affectionate nickname that Saint Josemaria gave to his successor, Blessed Alvaro, who was his closest collaborator for many years. It also calls to mind how Jesus named Simon “Petrus,” meaning rock.

The difficult situation in the Middle East was a recurring theme. When asked for his opinion on what the prospects are for peace, Pizzaballa half-jokingly waved his hands in objection “I’m no prophet!” but continued more seriously that “The experience of these past years [referring to the moderator’s earlier remarks on Camp David and the Oslo Accords] shows…that politics alone is not capable of solving this.” Real dialogue, true encounter is absolutely necessary, he continued, which requires “real respect, respect for the other.”

He said, according to ACI Stampa:

“This is the beautiful aspect of Jerusalem: if…we look at the personal and human reality, we meet wonderful people, which enriches dialogue so much. My relationships with Jews and Muslims have changed my life. In speaking about the Gospel, I realized that there were questions I had never asked myself – I, who was born a Catholic!”

He also commented that “the identity of Jerusalem cannot be questioned, because Christianity is incarnation and there is no incarnation without place: without Jerusalem, our faith would be only a story”.

Another theme, hopeful and inspiring, was the power of the Holy Land to change pilgrims’ lives, and Saxum’s contribution in this area. Msgr. Ocariz remarked how simply the fundraising for and construction of Saxum itself was a clear example of international and interreligious cooperation.

Two videos were also shown to the audience: one, with testimonies of Italian pilgrims who had gone with Amici di Saxum to the Holy Land, and “It Happened Here (2): Pentecost,” from the video series that Friends of Saxum receive about the Holy Sites on the relevant feast days.

In addition to words from Aldo Bressi (president of Amici di Saxum) and Massimo Caneva (President of AESI, Associazione Europea di Studi Internzionali), Rosalinda Corbi (general secretary of the Saxum Foundation), gave an update on the finishing touches and future projects of Saxum Visitor Center, including the development of the Emmaus Trail, and asked for prayers and donations for everything that the Visitor Center has ahead of it.

Amici di Saxum is the first and – as of now, the only – association of Friends of Saxum that has been formed within a country, and since last year, they have successfully organized many pilgrimages to the Holy Land. It is hoped that they will serve as inspiration for the many Friends of Saxum around the world for initiatives in support of the Holy Land from all over the world.